When spotting an enemy, The Shotgun Guard will fire its Shotgun which can deal up to 24 damage if all the pellets hit the target. In comparison to the Light Guard, this is rather a significant amount of damage.

The Shotgun Guard can fire in a quick succession and if left alive, he can do a lot of damage in a short period of time.

Sometimes, when a Shotgun Guard crouches to avoid incoming bullets, he may also return fire from his current position. This is very common in Quake II Mission Pack: Ground Zero. 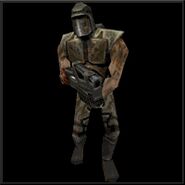 Retrieved from "https://quake.fandom.com/wiki/Shotgun_Guard_(Q2)?oldid=88041"
Community content is available under CC-BY-SA unless otherwise noted.