Shub-Niggurath, code-named Quake, is the absolute ruler of the Monsters in Quake's reality and the final boss of Quake. Known as the Hell-Mother, All-Mother, and the Witch-Goddess, Shub-Niggurath is the mother of all monsters that roam the dimensions of Quake. She has spawned an army to invade Earth using the humans' own portal technology. She'd planned on using the four runes to cause such destruction, but the runes were instead sought by the player and were used to gain access to Shub-Niggurath's Pit in confronting the Witch-Goddess. She physically resembles a massive demonic tentacled creature, with three huge tendril-like limbs extending upwards from her bleeding central mass.

Assassinating Shub-Niggurath and stopping her invasion of Earth is the main goal of Quake. Ranger fights through the four Episodes to locate the four Runes which he uses to open a passage to Shub-Niggurath. Shub-Niggurath spawns an army of Shamblers and Vores to kill him, though they are promptly eliminated as Ranger works his way to a Teleporter. Using a Spiked Sphere that floats around the world as a guide, he was able to kill the Old One. Though infinitely powerful, even Shub-Niggurath could be destroyed by the laws of physics (in this case, a Telefrag).

Shub-Niggurath is an Old One with vast magical powers. For many eons, she enslaved many dimensions. When humanity first invented the slipgate technology, she sensed it and discovered our dimension. She connected the slipgates to her own realms and started an invasion of Earth. 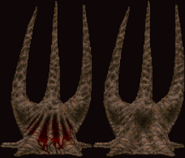 Texture map
Add a photo to this gallery

Retrieved from "https://quake.fandom.com/wiki/Shub-Niggurath?oldid=82395"
Community content is available under CC-BY-SA unless otherwise noted.