The Stalker is an enemy introduced in Ground Zero. It is one of most common enemies in the expansion pack. It is also one of most annoying enemies, as it has two annoying abilities: Fake Death and walking on the ceiling.

The Stalker appears to be a robot spider with a human head. The Stalker has the same speed and size as the Parasite, and can fire lasers that are on its body. The Stalker also has two types of melee attacks: Jump and Claw, it can use its claw pretty quickly. Sometimes the Stalker can ambush the player, because the Stalkers can jump and walk on the ceiling, and then come back down on the floor again if it wants, so be careful with these buggers. Also, the Stalker is seen in every unit in Ground Zero, and can be spawned by the Black Widow Guardian that is seen near the end of the game.

Stalkers have the unique ability to recover from their wounds. Sometimes when the player attacks them, the Stalkers will fake their death by lying on their back. This condition is easy to recognize by the fact that the Stalker's limbs will twitch slightly, whereas a truly dead Stalker will lie still. If left alone, the Stalker will gain back its health, healing any visible wounds and then jump back to its feet and attack, fully refreshed. Whilst a veteran player will be able to tell whether he has killed the Stalker or not, it is recommend to just gib it to be assured of its death. The Stalkers are a tough foe and one fight per stalker is more than enough.

The Stalker uses an upgraded blaster at long range targets while it's charging at the enemy. If the Stalker has a blaster, then that means it'll drop cells for your weapons that require them. The Stalkers normally use their blaster in long range, or on the ceiling. Remember, that Stalker's Blaster is upgraded, so it does more damage.

With an enemy like this, it should have a melee attack, like the claw attack. The Stalker has a pretty quick claw attack, once it attacks with one claw, it quickly claws the enemy with the same claw or the other one. Be sure to stand back while it's doing the attack.

The Stalker has a great jump tactic. From about 7 feet, it can jump right towards the enemy, and start its claw attack. The Stalker can also use its great jump to get to the ceiling.

As noted above, once the Stalker falls on its back, gib it without delay as the only thing even worse than fighting the Stalker is have one attacking the player from behind whilst he/she is engaged in a battle with other Strogg. 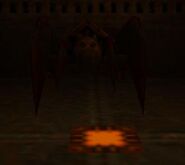 Stalker leaping at the player.
Add a photo to this gallery
Retrieved from "https://quake.fandom.com/wiki/Stalker?oldid=81697"
Community content is available under CC-BY-SA unless otherwise noted.