Back to page
Edit

The Stroyent processing Creature is a large and excessively corpulent partially-stroggified creature, which is being used by the Strogg as a vital part in their Stroyent production operation at the Putrification Center.

The creature is force-fed with raw Stroyent, which is then somehow processed within its stomach and digestive system in order to become ready to use.

During the later stages of the War against the Strogg, the stroggified space marine Matthew Kane encountered this creature and had to evade its dangerous metal claws or blade. He eventually defeated it by overfeeding the monster, causing its bowels to burst and blowing open a hole in the floor, allowing Kane to escape through the bottom toward the Waste Processing Facility. 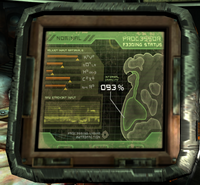