The Super Tank, also referred to as the Tank Guardian or Tank Boss, is one of the rarest and most powerful enemies in Quake 2. The player will only encounter two throughout the game. They defend highly important sectors of the city including the Laser Grid in Unit 3 and the Power Plant in Unit 6. They possess armor that outclasses even the Tank Commander. They are about three times the size of the Tank. They are essentially a giant tank torso mounted on a caterpillar tank tread base, hence the trademark "squeaking tread" sound they make while rolling about. Out of all the bosses and tough enemies in the game, the Super Tank is the quickest, taking full advantage of its massive tank-like track.

It fires a long stream of accurate bullet fire, much similar to the Makron although the Super Tank only has one. It is very useful at pinning the player behind cover and can be damaging if the player is caught in the spray for a period of time. Each bullet does 6 points of damage which can easily add up to high amounts of damage if the player is caught in the spray. The Chaingun can do around 60 damage a second, thus it will only take a couple of seconds to kill the player. Unlike other stronger enemies such as the Gunner, which has a delay moment before launching its machine gun attack, the Super Tank has no delay (much like the Machine Gun Guard). To avoid this, it is best to confront the Super Tank from a distance, so that it will mainly use its rocket launcher which is much easier to dodge.

The Super Tank has a shoulder mounted rocket launcher which fires three rockets one after the other. Whilst easy to dodge, getting hit by this attack will surely kill the player if not devastate his/her health and armor. Each rocket does 50 damage times 3 = up to 150 damage. The player will only ever confront Super Tank in open areas, so it is easy to fight at a distance and evade incoming rockets. 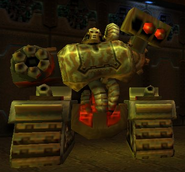