The Tank Commander is a heavily armed and armored behemoth of almost identical design to the Tank, with black and red armor and a golden Commander's insignia on its chest plate denoting its rank. Like the Tank, its movement speed is drastically cut by the weight of its armor and armaments. They only appear on active duty in the Palace area towards the end of the game.

Its black armor gives it a massive 1,000 hit points, which is only overshadowed by the bosses. Due to the Commander's high health, it is best to save up the ammo for the game's most powerful weapons. In the Palace, there are plenty of Icarus who drop Cell pick ups so you will always have the BFG10k ready to use when you confront a Tank Commander. See below for more details.

Tank Commanders only appear in Unit 9 of the game (The City/Palace). Here they are a common enemy in the Outer Courts and Lower Palace and are rare in the Upper Palace.

The Tank's right arm is a Machinegun, which works differently from the one used by the the Enforcer or Gunners. It shoots in a wide arc in the players direction, with barely 1 or 2 bullets actually hitting at long range. However, the closer the player is to the Tank, the more times the bullet spray will connect, becoming extremely deadly at point blank. It is thus recommended to either take cover or move as far away from the Tank as possible.

The Tank's left arm is a Light Blaster that fires three blasts in a row, dealing high damage. While it is possible and easy to dodge this attack, the damage it deals is not worth the risk so it is much safer to take cover, wait for the attack to finish and then continue with your own attack.

The Tank's most powerful attack is a shoulder mounted Rocket Launcher. The Tank's Rocket Launcher is among the deadliest attacks in the game and makes fighting the Tank in open ground something to avoid at all costs. The Tank can launch a seemingly unlimited stream of rockets which it can aim where the player is about to move to whilst dodging the one before it. For this reason, it is important to face the Tank where there is cover available. If the player takes cover when the Tank launches this attack, it will only fire three rockets before moving to the next attack. 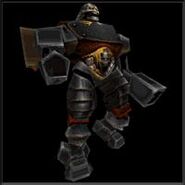 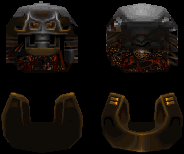