In Quake 2, a Technician is a floating mechanoid, comprised of two halves; the upper half is a transparent tube, containing a head or brain floating in a red liquid, cybernetically linked to a respirator and all of its other equipment. Its lower half is purely mechanical, comprising a weak blaster for ranged attacks and two claws for melee attacks (its left one looks like a two-finger claw, and its right one looks like a small deformed fork/trident), as well as four jets enabling its flotation. The Technician has surprisingly high health, so make sure to break out your powerful weapons when you see one.

As Technician's name implies, he's a technician and is not designed for combat. Its only 'real' weapon is a single Hyperblaster, which is also not too strong. He may use his claw or electrifying tool as improvised weapons but both of them are not designed for combat due to their low damage and being placed at Technician's sides, meaning that when he wants to attack with them, he must turn its rear and he can never see what he is currently swinging. The claw is possibly used for grabbing and holding things, while the electrifying tool can be perhaps used to restore energy in broken machines or as a welder to mend and repair. Even his Hyperblaster can also be categorized as a tool of some kind to nail metal plates together. All that sums up as that Technician could not be designed for direct combat at all.

The Technician appears at the start of the Warehouse hub, and is a very rare enemy throughout the game. 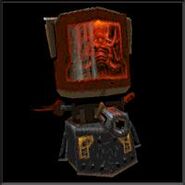 Technician's texture map when injured
Add a photo to this gallery
Retrieved from "https://quake.fandom.com/wiki/Technician_(Q2)?oldid=89011"
Community content is available under CC-BY-SA unless otherwise noted.