The Tesla Mine is weapon that is only seen in the Quake II mission pack: Ground Zero. The Tesla is a lot like the Lightning Gun from Quake 1, however it is not a gun, it's a thrown automatic weapon that will fire any enemy. The Tesla can attack you in Multiplayer, but not Singleplayer. Teslas are good for ambushing certain enemies, like: Light Guards, Shotgun Guards, Machine Gun Guards, Enforcers, Gunners, Iron Maidens, Parasites, Berserkers, Stalkers, Gladiators, etc. The Tesla has a certain health limit, so it will get destroyed when it gets to much damage. Remember: Do not put two Teslas next to each other, or they'll just end up fighting, and destroying each other, making a waste of Tesla. 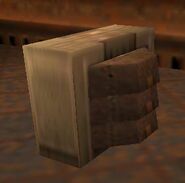 How Tesla works
Add a photo to this gallery
Retrieved from "https://quake.fandom.com/wiki/Tesla_Mine?oldid=79445"
Community content is available under CC-BY-SA unless otherwise noted.