Turrets are automatic guns that are introduced in the Quake 2 mission pack: Ground Zero. Turrets come in different types: Blaster Turret and Rocket Turret. Turrets are very powerful, very tough and can prove to be a great pain in one's back. Turrets are normally found hiding away where the player cannot possibly see them before it's too late. Even a veteran player is going to have a hard time with the sheer number of turrets, causing them to be paranoid about every wall and ceiling in the entire game by peeking every time entering a new area.

Turrets will normally be hidden away behind a wall, although keen-eyed players can spot the distinctive wall plates that conceal them, all in all they are hidden and a player will have no idea. These hidden ones will normally wait for a player will walk past into the room where there will be enemies. Whilst the player deals with the enemies, the Turret will reveal it self and get a few cheap shots from behind. There are two sounds which can be clearly heard that will reveal that a turret has woken up. First off there is an explosion as the plate covering the Turret is blown up and the second is a machine sound as the Turret emerges from the newly opened wall.

In rare cases some turrets might not be hidden, but are dormant until the player gets close to them. These turrets have their back sides with a green stripe facing outward. They will take increased damage in this state, a single shot from a Railgun can destroy them.

The two factors that make fighting these things very difficult is their small size and their accuracy. Turrets will fire at the area where you are moving to, not where you are, so being very careful with your movement is a must. Strafing side to side will get you killed very easily. Laser turrets fire at a fast rate, comparable to a light guard who stands on the spot. The player must watch every shot and move out the way and then be ready an instant later to dodge the next and so on.

Rocket turrets are even more deadly as the splash damage is an extra factor in making it difficult. It's a matter of timing, wait for the shot, dodge and then wait for the next shot beware that of the splash damage so move faster. Also be careful of taking cover as when the player takes cover, the Turret will fire off another shot at where it last saw the player. This will take new players off guard as they take cover and then move out again only to be hit by this sneaky extra attack.

Their shots as stated above is light blasts and rockets. Light blasts do 20 damage whilst Rockets do 50 damage. Due to the high damage and relentless attacks, these things are deadly and this is made even worse by its small size. See below for strategies on the best ways to kill turrets. 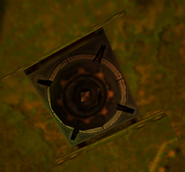 A rocket variant of the turret. 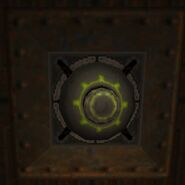 The back side of both turret variants.
Add a photo to this gallery
Retrieved from "https://quake.fandom.com/wiki/Turret_(GZ)?oldid=80665"
Community content is available under CC-BY-SA unless otherwise noted.