The USS Hannibal is a massive interstellar cruiser that belongs to the SMC. The official description is MCC Hannibal, short for Mobile Command Center. It's called like this during marine communications and it's also marked on the Hannibal's hull. During the Second Invasion of Stroggos, the Hannibal takes a key role, serving as mobile headquarters for the military advance. At the time of the second invasion, the ship has already been in service for an unknown amount of time. Kane will re-enter the cruiser twice in game.[note 1]

The USS Hannibal is the flagship of the SMC during the second Invasion of Stroggos. It serves as Mobile Command Center (MCC) and thus coordinates the whole invasion. Therefore, the ship is of major importance to the SMC, and does not partake in general battles. It is also likely that many of the SMC's leading military personnel and tacticians are stationed aboard the Hannibal (like General Harper), which is why it is heavily guarded and protected (see Security).[note 2]

The Hannibal sports four visible gun turrets on its right and left side, a set of energy weapons which can be seen in action during the final step of the Hannibal's landing sequence when it destroys a Strogg Weapon Station, thus freeing some pinned-down marines, including the Player (possibly these are of Strogg origin). In addition to this, several small, two-barreled chainguns can be spotted along the ships hull. Due to its key role during the invasion, the Hannibal most likely also possesses missiles and further weaponry. As several heavy ground vehicles such as the Hovertank have regenerative shielding, it is possible that this technology is also used on this ship. Because the Stroggs have air defense even against targets in space, the Hannibal should have some sort of contermeasures in order to get close to the airspace and land.

As the Hannibal is capable of planetary landing, it possesses at least one Walker bay with an elevator for deployment (which is also used by foot soldiers to enter the ship). Furthermore, it is very likely that the Hannibal also holds the heavy transport trucks of Death Convoy that can be seen during Operation: Advantage. Also, the Hannibal is capable of launching Drop Pods sufficient for at least two smaller squads of marines (as can be seen during Operation: Last Hope).

Like all greater SMC spaceships that take part in the Invasion of Stroggos, the Hannibal seems to possess a faster-than-light "jump-drive" (like they can be seen during the Quake 4 intro), that may be derived from the Strogg wormhole technology.

During his stay on the Hannibal, Matthew Kane resided on the D deck of the ship. This seems to be the undermost deck as it sports the elevators that can deploy Marines and vehicles on the ground. Therefore, the Hannibal should have four decks (A-D). These decks are connected via elevators (during one's first stay, a marine can be seen waiting for one). Also, ladders can be found on D deck, of which one leads to a gun port. It is unknown whether the other ladders lead to other decks or to gun ports as well.

The interior is quite dark due to very little illumination. In many of the passageways, consoles can be seen, indicating that the Hannibal's systems are (or at least were) not very automatized and require a lot of decentralized controlling. The ship houses briefing rooms for squads, which feature a round table big enough for about ten marines to sit with a holographic projector in the middle that displays visual data and objectives of upcoming operations. Furthermore, there's a full medical research compartment with several laboratories in which parts and sometimes even complete captured Strogg corpses are examined by Medics and then stored for further analysis. In their free time, the marines aboard the Hannibal can use recreation rooms that are also used for dining. As the Hannibal seems to be completely manned and operated by Marines, there exists a large armory in which marines can arm themselves and receive weapon upgrades. The fact that only common SMC weapons like Blasters, Machine Guns and Shotguns are stored there indicates that more advanced weapons like Hyperblasters, Grenade Launchers and Rocket Launchers are stored elsewhere. The most important part of the Hannibal however, is the command room from which the military advance of the SMC is coordinated. Apart from a lot of consoles, this room features a large holographic table that can show holographic tactical images of the surface of Stroggos. 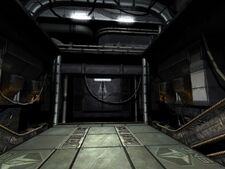 The large Troop elevator leading to a Walker Bay 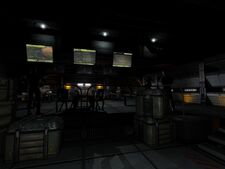 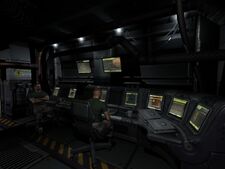 Two Marines sitting at one of Hannibal's many consoles. 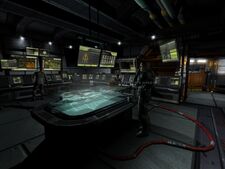 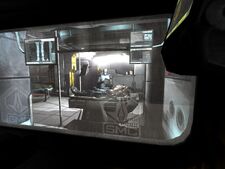 A Strogg unit is examined in one of Hannibal's MedLabs 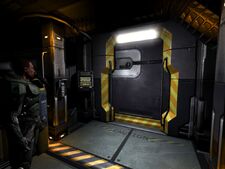 A Marine waiting for an elevator 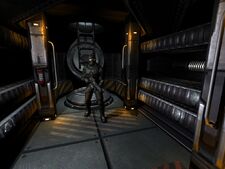 The gunports and other sensitive areas are guarded by fully-armed Marines. 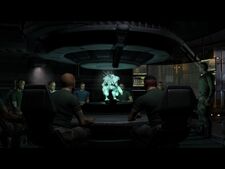 The Hannibal also houses Briefing rooms for the squads stationed aboard.
Add a photo to this gallery

Due to its high importance to the SMC, the Hannibal is very closely protected, marines are not allowed to carry weapons within the ship (except for guards who protect important areas) and have to enter Decontamination Chambers upon setting foot on the ship. In these Decontamination Chambers, marines wishing to enter the ship are exposed to a mix of gases and chemicals that kill all potential bacteria as well as Strogg Nanites. The whole process is closely watched by a Medic who scans and controls every entering Marine. One of these Chambers is directly connected to the Walker Bay. Also, certain areas like the gun ports are restricted areas where only authorized personnel is allowed to enter.

Despite being heavily guarded, the Hannibal is attacked and boarded by Strogg forces shortly after Rhino Squad's briefing on Operation: Last Hope is finished. Fortunately, the Strogg boarding action is repulsed by the SMC Marine guards and escaped back to Orbit.

Retrieved from "https://quake.fandom.com/wiki/USS_Hannibal?oldid=80603"
Community content is available under CC-BY-SA unless otherwise noted.