Just a useful feature list to keep everyone up to date on what the server is looking like. I originally had it sorted by mods I was and wasn't using, but found too many of them I was deviating from the intended design, or just was picking and choosing small parts of convoluted mods. Needless to say, I wished for something with a bit more organization. So here we are, a nice list just clarifying what the features of the server are.

Note that I am trying to make sure server incompatibilities have nothing to do with me. So while there are known issues, I can verify most of them were existent in the mods where I ripped the code from.

I have tried using PAK Explorer to make transferring the files a bit easier, but the problem is that detection of files has been less than reliable. It seems to pick and choose what works and doesn't work, so that it ends up failing at random points. Raw files aren't as user friendly to install or transfer over, but at least when placed in a directory we can be assured they work.

See credits at the bottom for the base I worked with. Many mods were slightly altered, merged together, or just had large portions changed around to fit the design mentality.

The biggest feature of our server is a mass randomization feature. No longer is every playthrough the same, in fact each time you die the level will be reset to be an entirely different experience. This means it is much harder for the game to get stagnant, since you never know exactly what you will get. A big focus of the server since the introduction of the randomizer has been with adding as much content as we can to it, providing a large variety of opponents for the player to face.

By far, the largest randomizer we have and the one that has the most custom resources is the Monster Randomizer. Every vanilla enemy in the game, outside of the Zombie (which wasn't included due to the crucified variants seemingly messing things up), now has a chance of being replaced with another random opponent.

Note that the randomization can have some side effects. Most notable is that bounding boxes are a thing; there are cases where an opponent can get stuck because a Monster with a smaller bounding box was originally intended to be located in that spot. I could cut down on randomization so that it cannot make an enemy larger than the intended bounding box, but the problem is that most opponents will work perfectly fine. I think the occasional stuck enemy is better than a more stable but less chaotic form of randomization.

Reskinned opponents such as the Yeti and Blazing Fiend exist at a rarer chance than totally new opponents like the Snakeman or Psionic Slug. This means we now have some rare treasures to find and face within the randomizer.

Psionic Slug - Whistles a merry tune as it smokes mental rings across the 4th dimension. It is even tutti fruity! 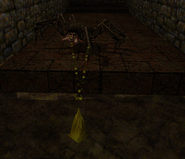 Snakeman - A mercenary hired by Quake just to take you down. Unluckily for you, he takes his job seriously. 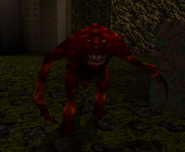 Blazing Fiend - A monster so overpowered that it likely shouldn't even be included in a regular list. Can gib a Shambler in one shot, has more health than any vanilla opponent, and is so fast he can "blink" from location to location. Did we mention we are sadists?

Yeti - What are frozen behemoths doing working with an Elder God deity? Do you even care? Shoot it like every other bastard and stop asking questions!

Shrek - Shrek is pissed that everyone seems to be invading his swamp. Can you sway him to your side, or are you destined to end up with a bleeding rectum?
Add a photo to this gallery

While most Monsters are walking based entities, the Scrag is a flying opponent. Fitting it into the regular randomizer didn't make sense, since the opponent would drop to the ground and likely end up in an unintended spot. So we instead made the monster type define the randomizer, when we get some Rotfish variants there probably will be a Swimming Monster Randomizer. Otherwise this is pretty much the same as the normal Monster Randomizer. Note that the way this is done means that only levels with Scrag entities get the chance to get these opponents.

Hell Scrag - The Blazing Fiend's aerial cousin! While normal in movement, its projectiles can only be summarized as a Shotgun blast of fire from Hell. Circle Strafing is a necessity.
Add a photo to this gallery

To have a fairer shot of taking down the hoards, we have also provided you with a Weapon Randomizer. Oh, who are we kidding, we swapped all the vanilla Weapon entities around so that you can get a Thunderbolt on a level with no Cells. Still, it is the only way to find these Custom Weapons outside of having it in the default loadout. 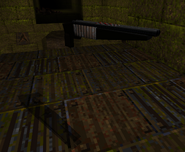 Laser Gun - A weaker alternative to the Thunderbolt, the Laser Gun fires dual projectiles normally used by the Enforcer. Bounces off Knights, Death Knights, and garbage cans.
Add a photo to this gallery

Outside of the addition of the randomizer, which is the main focus of this modification, we have included a wide number of additional changes to make gameplay flow all the more.

Retrieved from "https://quake.fandom.com/wiki/User_blog:Deathstalker666/QuakeWikia_Server?oldid=84485"
Community content is available under CC-BY-SA unless otherwise noted.