Back to page
Edit

Visor is a playable character and an enemy warrior in Tier 5 of Quake 3 Arena Singleplayer. A mysterious Human Cyborg Strogg Warrior Villain who never talks about his past. Assumed to have Strogg origins.

He appears to be a Monster of a Man in blood splattered battle armor with a metal visor grafted onto his face. May be because of the visor hindering his senses or vision, he has a rather slow turning speed and reaction time when compared to all other gladiators at high difficulty levels. Pretty aggressive and attacks whoever close, almost never tries to be a finisher and stack up easy frags. He's pretty open for surprise attacks from the back. He doesn't really have a movement characteristic that sticks out.

Prefers the Rocket Launcher mostly, but would go for the Railgun. When he has the Plasma Gun or BFG10K, he may be troublesome to get rid of because he uses them with a nice prediction and aims for dealing splash damage in order to air juggle his opponents helpless. His reaction time gives him a quite long wind-up time in the terms of dealing damage but if he's holding Plasma Gun he becomes quite troublesome to get rid of once he tracks whatever infront of him to predict their movement and knock 'em dead.

His other names in the chat lines are; "Voice-box", "Clone-head" and "Daisy-picker". Probably the latter one is an allusion to his slow turning speed. He may have a slow wind-up but if you ever let him stumble upon his favorite weapons, his comeback on 1-on-1 would be little frustrating to overcome.

None of the warrior clones that populate the Arenas know the name of the first of their line. In those rare moments when not training of fighting, the clones speculate on the origins of Visor Prime or just "Visor" as he has come to be known. Many believe him to have been synthesized from the dominant genes of countless warriors. Others believe him to be one of Terra's legendary heroes. Visor knows, but he never tells.[1] 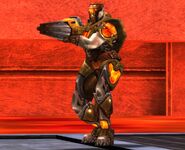