The Wraths are the minions of the Overlord, the boss of Quake's forces in Dissolution of Eternity. They’re fairly common throughout the game and are a worthy foe. They float in the air like the Scrag, and can catch up to the player quickly.

The Wrath ball is a red spiked ball that homes in on the player, much like the Vore's purple energy pod. It does a very little 6 to 8 damage and thus is not much of a threat. They move much faster than Vore's attack and are very difficult to avoid.

The Wrath will explode upon death, dealing about 60 damage to anyone near by. Thus, it's recommended to fight the Wrath at a distance. 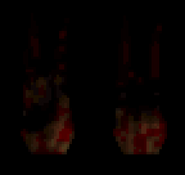 Texture map of third & last giblet
Add a photo to this gallery
Retrieved from "https://quake.fandom.com/wiki/Wrath?oldid=85399"
Community content is available under CC-BY-SA unless otherwise noted.